Posted in Scafell Pike from Langdale, Walks in the Lake District

Longer route to Scafell Pike from Great Langdale. Though the walk is longer, the drive in for most is an hour less.

The walk up Scafell Pike from Langdale is a fell walk for those who like the long walk in, and out again. It’s just shy of 20km, or just over if you also pack Great End into your itinerary for the day. It may presents one of the longest routes to England’s highest peak but, in return, you get a proper day out among some of the very best of the Lake District. Expect lofty views into some of the Lake District’s most famous valleys and impressive rock scenery as you traverse England’s highest ridge.

Ample parking can be found in Great Langdale either by using the National Trust car park at Stickle Ghyll (free for NT members) or by using the National Park’s Langdale car park (£8 for the entire day). Alternatively, the 516 Langdale Rambler bus from Ambleside will get you deep into the heart of the valley. The route description starts from the bus stop at the end of the valley road, adjacent to the Old Dungeon Ghyll Hotel.

With the high fells of Bowfell and Crinkle Crags framing the scene ahead, the route begins to the rear of the ODG. Here lies the Cumbria Way, a long distance path which crosses the county from Ulverston in the south to Carlisle in the north. Pass around the hotel to access it via a gate and start heading west along the wide track.

The bridleway path is fairly level and easy to follow as it passes beneath the towering Langdale Pikes into the depths of Mickleden, one of the two valleys which join to form Great Langdale, the other being Oxendale.

After around 2 miles, cross the footbridge over Stake Gill and bear left as the path forks – a low slate sign points the way towards Rossett Pass. The right-hand fork takes the Cumbria Way over the Stake Pass and into Borrowdale. Our route begins to climb up to the Rossett Pass alongside Rossett Gill via a series of wide zig-zags. The view above is dominated by the immense crags of Bowfell.

Once at the top of the pass a brief detour to the summit of Rossett Pike gives an airy view of Mickleden, should time and energy permit, otherwise, press on, following the path as it drops briefly to Angle Tarn and then climbs up a series of paved steps at Tongue Head.

Eventually, you will reach a cross shelter, built from stone. This is the famous Esk Hause (though the summit of the hause is actually higher still). This is a meeting point of several major routes and the highest foot pass in the national park. In poor weather, navigation here can be tricky as the network of paths all converge on the shelter.

From the shelter, head south-west up to the true summit of the pass between Esk Pike and Great End. Admire the views down Eskdale, one of the Lake District’s most unspoilt valleys.

From the top of the pass, a well-worn route, marked intermittently with cairns, takes you up onto the high ridge of the Scafells. You’ll notice the ground underfoot becomes much rockier and uneven so care should be taken. The path makes its way between the two minor summits of Ill Crag and Broad Crag, towards the final obstacle before the summit.

Broad Crag col separates Scafell Pike from the neighbouring Broad Crag and involves a sharp descent and re-ascent. Don’t worry though, thousands of pairs of boots have worn an obvious route. Once on the other side of the col, the summit will slowly begin to creep into sight.

Spend some time exploring the rocky summit, the result of thousands of years of glaciation. The best of the views can be found by wandering to the edges of the plateau, away from the crowded summit platform. To the southwest is Scafell Pike’s neighbour, Scafell, standing over the impressive depression of Mickledore. To the south are the wilds of Eskdale while the north peers down into Wasdale.

The easiest return is to re-trace your steps back to Esk Hause and Great Langdale though the more adventurous may think about descending the Corridor route to Styhead before climbing back up to Esk Hause via Sprinkling Tarn. Either way, your legs will be telling you you’ve had a classic day out in the Lake District. 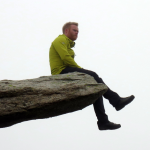 Dave is our Lake District local expert, often found in the depths of Cumbria he's the author of his own part on the web, All the Gear but no Idea.

At Walk up Scafell Pike, we've outlined all the walks up England's highest mountain but...

What are the top 10 Fell Walks in the Lake District? Who knows, but here's...

10 Easier Family Walks in the Lake District You Should Try

The Lake District boasts numerous fells and countless walks up them, from our very own...

This website uses cookies to improve your experience while you navigate through the website. Out of these, the cookies that are categorized as necessary are stored on your browser as they are essential for the working of basic functionalities of the website. We also use third-party cookies that help us analyze and understand how you use this website. These cookies will be stored in your browser only with your consent. You also have the option to opt-out of these cookies. But opting out of some of these cookies may affect your browsing experience.
Necessary Always Enabled

Any cookies that may not be particularly necessary for the website to function and is used specifically to collect user personal data via analytics, ads, other embedded contents are termed as non-necessary cookies. It is mandatory to procure user consent prior to running these cookies on your website.

SAVE & ACCEPT
Scroll to Top